words that matter most

here are some personal stories from this incredibly rich past year. because of these stories i am doing what i am doing.

one friday i sat at one of the tables on queen's road central. it was occupy time. and lunch time. two girls did their uni assignments in the ‘study area’ at the same table. behind me a carpenter made more tables. for more students. making space. building time. there was a general energy of helpfulness, politeness and presence. i myself did a plant carving dedicated to the movement. a women in her fivties sat down next to me with her lunch. she offered me some of the food from her lunch-box. we started talking. she was working as a warden in an underground car park. now during her lunch break was the only time she saw the sun. she told me she loved the umbrella movement: all of a sudden there was so much space in the middle of the city, there were people who had time, there were shared lunches and spontaneous conversations. you were not merely talking about the weather, you were talking about the things closest to your heart: about your ideals, about the future, about identity. it was the least thing i expected to happen in hongkong. i see hongkongers through different eyes now. i see that very near to the surface of conformity and obedience, there lies a deep longing for expression and freedom. when the women left she said ‘i love you’.

one of the most interesting conversations i had at clockenflap festival 2014 was with a toy designer. a plastic toy designer to be precise. she has been working in the toy business in china for over 30 years. so here we are, two women working with the same material, coming from exactly the opposite ends: she was designing and giving birth to plastic toys, i was picking up their remains after they had lived their consumer life. i have never heard so many up-to-date facts about chemical components, security standards, production procedures, recycling etc. and she was astonished about how much of it gets ‘lost’ in nature. funnily enough we felt very close. the last words were: 'i hate plastic' from both of us.

i was selling and talking trash at ocean park all day. as the closing of the park drew close flocks of people headed towards the exit streaming past the dai pai dong. ignoring the closing time a man approached the stall and looked at the items displayed on the shelves. after a while he said: 'my whole childhood is in this window.' and then he told me his story of when he was a little boy, his dad had given him a battery pack together with a tiny light bulb. exactly the same light bulb that i had found on the beach and put on display with the price tag 'response-ability'. as a boy he built a simple circuit by connecting the poles of the battery with the light bulb. it was magic. for hours he would hide under the blanket in his bed, play with the new discovery of electricity, read, think, sing ... it was his little world. just a blanket from the outside. his very own magic world inside. the man told me he works as a talk master for a radio station in hong kong. 'thank you' he said and left. i forgot his name. i will not forget his story and the moment it touched my story.


judith and richard lang have been making art from marine debris for over 20 years now. they are from california, met on a beach and are still finding their art pieces on that very same beach. they came up with the term ‘curating the beach’. i love this term! 'curating' has its roots from the latin word ‘curare’ which means ‘to care for’ and at the same time ‘to cure’. by cleaning up a beach, we care and we cure that beach from its burden of trash. true magic is happening when not only that beach is being healed but at the same time it is us being healed. on the sunday of imagine peace 2014 on lantau island we did a nature walk to find trash&treasure for the workshop i was holding. we could all feel the magic happening. nature has the most forgiving and gentle embrace. there are no words for this. just gratitude.

i would like to thank each and everyone of you who has helped me realise my visions in 2014. everyone who has picked up trash and changed the landscape with their own two hands. everyone who has contributed to raise awareness and changed the inner landscape with their positive attitude. anyone who changed some of their consuming habits. anyone who has passed on the word, who spread the images or who simply read this blog. thank you from the bottom of my heart! 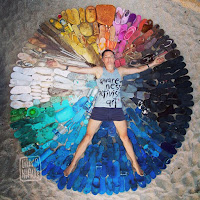 liina
i'm a german artist living in hong kong and bali. i'm specialised in large-scale environmental art installations using man-made and natural waste as my art material, finding a visual language for the pervasive impact of humans upon the natural world. thanks for taking the time to look at my works. feel free to contact me at liinaklauss(at)gmail(dot)com